Debonne Vineyards was established during the third generation of the Debevc family’s viticulture history. Anton Debevc, a 1914 immigrant from the Slovenian State of Yugoslavia, purchased a general fruit farm in Madison, Ohio in 1916. Anton’s son, Tony Sr., helped expand the vineyard in the late 1960’s.

In 1971, Tony Sr. and his son, Tony, began their journey as commercial winemakers, establishing world class standards in the Lake Erie and Grand River Valley regions. Debonne Vineyards was founded as a winery in 1972 with the construction of a winemaking facility and a charming Chalet.

Tony oversees the general operation of the business and Tony Sr. remained as vineyard manager emeritus until he passed away in 2010. Tony, and the vineyard and cellar crews carefully tend 175 plus acres of vines and produce over 85,000 gallons of wine each year, including a variety of delicious and award-winning wines. Debonne Vineyards is best known for Riesling and Ice Wine, but also produces excellent Cabernet Franc and Chambourcin red wines, and Chardonnay and Pinot Gris white wines. 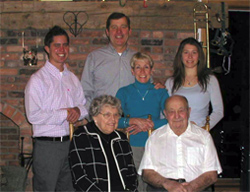 The Debevc family was the first winery to be named by Vineyard & Winery Management magazine as “Wine Family of the Year” and wines from their premium line “Debonne Vineyards” garner awards every year in national and international competitions from California to New York.